Back in April 2012, I wrote the first post of this blog. It was about the language of social care and how so much of it clouds or excludes. One thing that you have to learn pretty smartish when you ask for support is that the reality is often the exact opposite of what is presented to you and language is the main vehicle for skewing the reality.

Over the years I’ve written loads on this theme. Not just in this blog. Steven’s court case gave me a platform where I’m invited to speak at events or write for various publications and the language of social care is often the bedrock of my talk or written piece. Since 2012, I’ve also become more aware of how cancerous the practice of “othering” learning disabled people is and once again, the language is the first step to turning people into non human objects. Service users in placements. Service users accessing the community. Service users displaying challenging behaviour. Family relationships are not mentioned. Instead you become another name in a circle of support. As I wrote for Rightful Lives, the minute someone is seen as non human, the door is opened to all sorts of unspeakable violence towards them. A death is met with an indifferent shrug and any attempts to present the humanness of the deceased person is only met with more violence. This isn’t an accident. This is deeply embedded practice. A means to justify an dehumanising end.

During the last six years, I’ve been constantly fascinated by the ability of social care to reinvent it’s language but never its values. It’s like that bash the mole game at fairgrounds. In my last blog I wrote about the new housing word for learning disabled people – a Pod. It’s a bluff on many levels. The actual “building” is a cross between a shed and a 1960s Pontins wooden chalet. But obviously they can’t call it a shed or a chalet. They need a new word. A Pod. In a few months time, there’ll be a new word. Whatever it’ll be, it won’t be called a home. Or a house or a flat. A positive behaviour support therapist can live in a maisonette. A social care commissioning manager can set up home in a house. The supported living care assistant can finish their shift and go home to put their feet up in their flat. But check out the care plan for the learning disabled person and it will say, “P’s current placement is a community based Pod”. They could be writing about ET. Even the language for an animal would be more recognisable to the general population – “Fluffy the rabbit lives in her hutch”.

Once the setting for the non human’s residence has been established, everything that goes on within it, follows the same pattern. Nobody cleans their teeth and has a shower. They have personal care. Nobody watches Fawlty Towers with their Dad. They engage in social interaction. And absolutely nobody has a wank. They have private time. Back in 2012, I made a vow. I had been so upset and disgusted at the way Steven was painted in all the court reports, I was determined to redress that portrayal. I know I can be a bit of a pain about it but I refuse to collude. I hope that whenever I write about Steven, his humanness is the striking feature of the writing. I hope the normality of his life resonates. I take my lead from him of course. It wouldn’t occur to him to ask for his personal care when he asks his support worker to give him a shave. I also much prefer his idiosyncratic use of language that swings across several decades within the same sentence. He’s just sorted out his The Proclaimers CD collection and announced the task had been completed with “Craig and Charlie are all ship shape and Bristol fashion”. I find that much more appealing than positive outcome completion. (That’s the phrase they used to write on his “behaviour monitoring log” whenever he made a pepperoni pizza).

Sometimes the two world collide and produce the moments of greatest fear and awkwardness because you’re dangerously entering into exposing the king’s got no clothes on territory. If you don’t use the language or play along with the false reality, dreadful consequences can occur. A smile, a stutter, a silence can be seen as an integrity exposing accusation and violence is never far away. The worse thing I ever did was to laugh at a multi disciplinary meeting. The absurdity and intensity of discussing a risk assessment for visiting his uncle prompted an unexpected snot filled laugh from me and instantly I knew I’d made a major mistake. I was talking about a human being. My son. My mate. They were talking about an object under a laboratory microscope. Everyone around the table could visit their uncle without a risk assessment but that’s okay because they’re human. Steven isn’t. My laugh said as loudly as any words – “Steven is as human as you and I”. But those words can never be uttered because the logical conclusion is – “You’re not needed. You serve no useful purpose”. Who wants to hear that about the job they’re doing?

This week Steven had his six monthly check up with the psychiatrist. It was a rearranged appointment. I missed the one back in October because I was in hospital recovering from a heart attack and forgot to remind the support workers. It was a bit tricky for the psychiatric team. If a learning disabled person isn’t human, then their families don’t live normal human lives either and a heart attack was a bit too real life for them. The elephant in the room for the past 10 years at these six monthly appointments is what the fuck is Steven doing seeing a psychiatrist? You’re plodding along seeing a paediatrician and then, Boom, you reach 18 and because you have a learning disability you are referred to a psychiatrist. It sets the tone for the rest of your life. Humans only see a psychiatrist is they have a mental health problem but you’re not human and a psychiatrist is seen as the best fit. Keeps a lot of people in jobs anyway.

My job for the rest of my life is to keep on keeping on with the human stuff. It’s the only thing I can do and I’m such an obstinate buggar, I can’t stop. 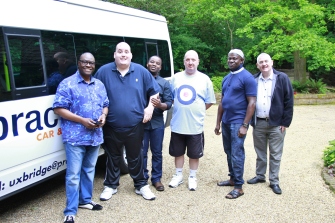 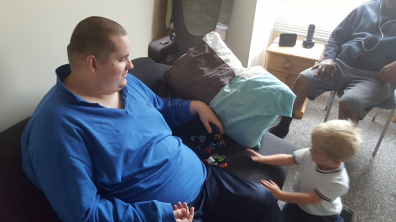 10 thoughts on “The Words On The Tin”